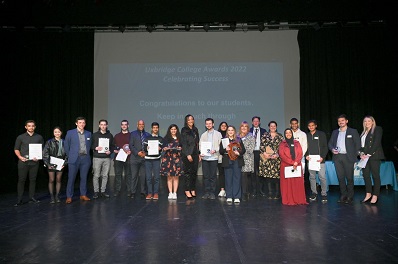 Bianca, who became a public face after competing in the BBC’s The Apprentice, and went on to succeed independently with her brand Bianca Miller London, spoke about her life and presented the awards.

The award winners, who were joined by friends and family at The Beck Theatre in Hayes, included:

Simranjeet Kaur: Super Star Award & Star Award in Computing and IT – an incredibly dedicated student, and a fantastic role model in a male-dominated field, as well as being the first in her family to go to university. She is now beginning a BSC in Computer Science at the University of West London, having entered college on a Level 1 course (pre-GCSE), and progressing to complete her Access to HE in Computing course, with distinctions and merits. She also worked part-time during her studies.

Raniyah Sandhu: Star Award winner for the 6th Form Centre – Raniyah achieved excellent grades in her AS Levels last year, with A grades in English Language and Literature, and Psychology, and a B in Politics. She is now on course to apply to Oxford or Cambridge University.

Raghad Ajlouni: Gavin Taylor Bursary Award of £1,000 towards Higher Education studies – Raghad studied at Uxbridge College for a total of six years, progressing from ESOL (English for Speakers of Other Languages) courses, to the Level 3 in vocational science, gaining three Distinction Stars. She has faced many obstacles along the way, but has now achieved her aim of studying Pharmacy at university.

Riddhi Joshi: Business Star Award - academically hard-working, as well as making a great contribution to the college community. One of our International Students, whilst at college, she also ran a small cake-making business, including raising £500 for Great Ormond Street selling homemade cupcakes. After achieving the BTEC Extended Diploma in Business, she is now studying Business Management at Brunel University London.

Talal Kharsa: Star Award for Cross College Maths – Talal is amongst students taking GCSE maths and English as part of their wider study programme. An extremely dedicated student who worked hard to improve, achieving a maths pass this year, as well as passing his English GCSE at college previously, and will now be able to apply for apprenticeships in digital marketing due to his maths and English passes.

Rikhil Assani: Star Award winner in Mechanical and Electronic Engineering - one of the growing number of young people joining Degree Apprenticeships, he is now joining Vinci Construction. He became the first student to achieve a Distinction grade in an externally assessed unit, designing and constructing a robotic arm, and achieved all distinction grades in the Level 3 Extended Diploma in Mechanical Engineering.

Tejinder Virdee: The Ian Hebditch Award – Tejinder has been at college since 2018, progressing from Level 1 through to the Level 3 Diploma and Extended Diploma in Art & Design, and now starting a BA (Hons) in Architecture. His portfolio also includes an unforgettable commission – last year, his design was chosen by Boris Johnson to feature on the reverse of the official No. 10 Downing Street Christmas card in 2021.

Johan De Sousa: Intermediate Apprentice of the Year Award – Johan was accepted as an apprentice at The Savoy Hotel, after writing to the head chef to ask for a work trial. He turned up in full uniform, with his own set of chef knives and impressed everyone. The role has seen him cooking and preparing food for the president of France and Congo during the mourning period for the queen.

Pearson PLC: The Work Experience Employer Award – Pearson are a trailblazer in supporting Uxbridge College and HCUC with a large number of substantial industry placements for T Levels in Digital. They have now committed to brand several courses at HCUC, lending their expertise to the design and delivery of the programmes, and also participated in the enrolment process for T Levels.

Bianca Miller-Cole made her name launching a diverse hosiery brand which was originally pitched on The Apprentice, but which left her as runner-up at the end of the series – however the brand then went on to success, with stockists including Selfridges. Bianca was recently ranked as one of the top 10 most powerful leaders on LinkedIn, chosen from 20 million members.

Dr Darrell DeSouza, Group Principal and CEO of HCUC, the merged college group for Uxbridge College and Harrow College, said: “What a fantastic night! All our winners were equally deserving, whether studying for academic qualifications, on vocational programmes, or work-based trainings such as apprenticeships, as were the industry partners we recognised in our Employer Awards category.

“Uxbridge College offers opportunities whatever your starting point, goals or needs, and you can really see this reflected in our winners’ stories.

“This was a particularly poignant night for me, as I am shortly retiring from my role after almost 21 years with Uxbridge College and HCUC, and was my final awards ceremony. Seeing all the incredible learner achievements and witnessing the pride they and their families and friends showed on the night, was an absolute joy. It reminded me of what it’s all about and why I have enjoyed my career in the FE sector so much and why I am able to reflect with immense pride on a College and a sector that provides so much to create futures for so many.”

Dylan McTaggart, HCUC Deputy CEO and Principal of Uxbridge College, said: “Inspirational, humbling, proud – three overused words, but each truly applies to our Uxbridge College awards night. It was joyful to celebrate everyone’s achievements, and to see just how much our young and adult learners gain through their time at Uxbridge College. Special thanks to our amazing performing arts students - the music and dance performances filled the room, and feet were dancing beneath every seat!

“All our winners were equally deserving, whether from our science and engineering courses, which continue to expand, or other professional areas such as health and social care, teaching, catering and hospitality, hair and beauty, travel and tourism, the uniformed public services, sport, the creative arts, and more.

“It was also a real privilege to have Bianca Miller-Cole with us, and I’d like to say a big thank you to her for coming along to speak and present the awards.”